After a long summer, when Austin experienced the hottest September in recorded history, we ventured out on a week-long RV trip to four Texas state parks that were strung along a path from Round Rock to far north-east Texas. The temperatures hadn't improved much on this first Saturday of October, but a promised cold front was supposed to cool us down to near 60° on Monday and even more cool air was in the forecast for Friday. If all went well, we could say good riddance to 2019's relentless summer season.

Fairfield State Park was only about two and a half hours from Round Rock, that is if you follow the route chosen by Siri, but we defied Siri's plan and took an indirect course through a series of small towns that stretched along an indirect route from just north of Temple, through Chilton, Marlin, Kosse, Thornton, Groesbeck, Mexia, Teague, and finally, to the small town of Fairfield.

We arrived at Fairfield Lake State park a little after 1pm, and got set up in campsite 109 by the lake. Most of the campsites were shady and surrounded by large hardwood trees. The trees didn't stop the heat and humidity, however, so we stayed inside air conditioned vehicles most of the afternoon. We spent the evening chilling in our vacation-home-on-wheels and planned Sunday's activities - fishing in the morning and hiking in the afternoon.

We discovered that Fairfield Lake used to be a power plant lake, until 2018, when the Big Brown coal power plant permanently shut down. According to the park staff, the lake used to maintain a temperature of about 107°, and Tilapia were the predominate species. Since the plant's closure, the lake cooled, Tilapia have diminished, and Bass have taken over - news that I was happy to hear.

The shoreline along the Post Oak camping area was lined with thick reeds and cutgrass, and was not easily accessible, unless you're fond of water snakes and sinking up to your knees in silt. Since I didn't bring my canoe or kayak, I chose the pier next to the nearby boat launch for Sunday morning's fishing spot. After dark, I went outside to stage my rod and reel and tackle box in the bed of my truck, but this spider had other plans! 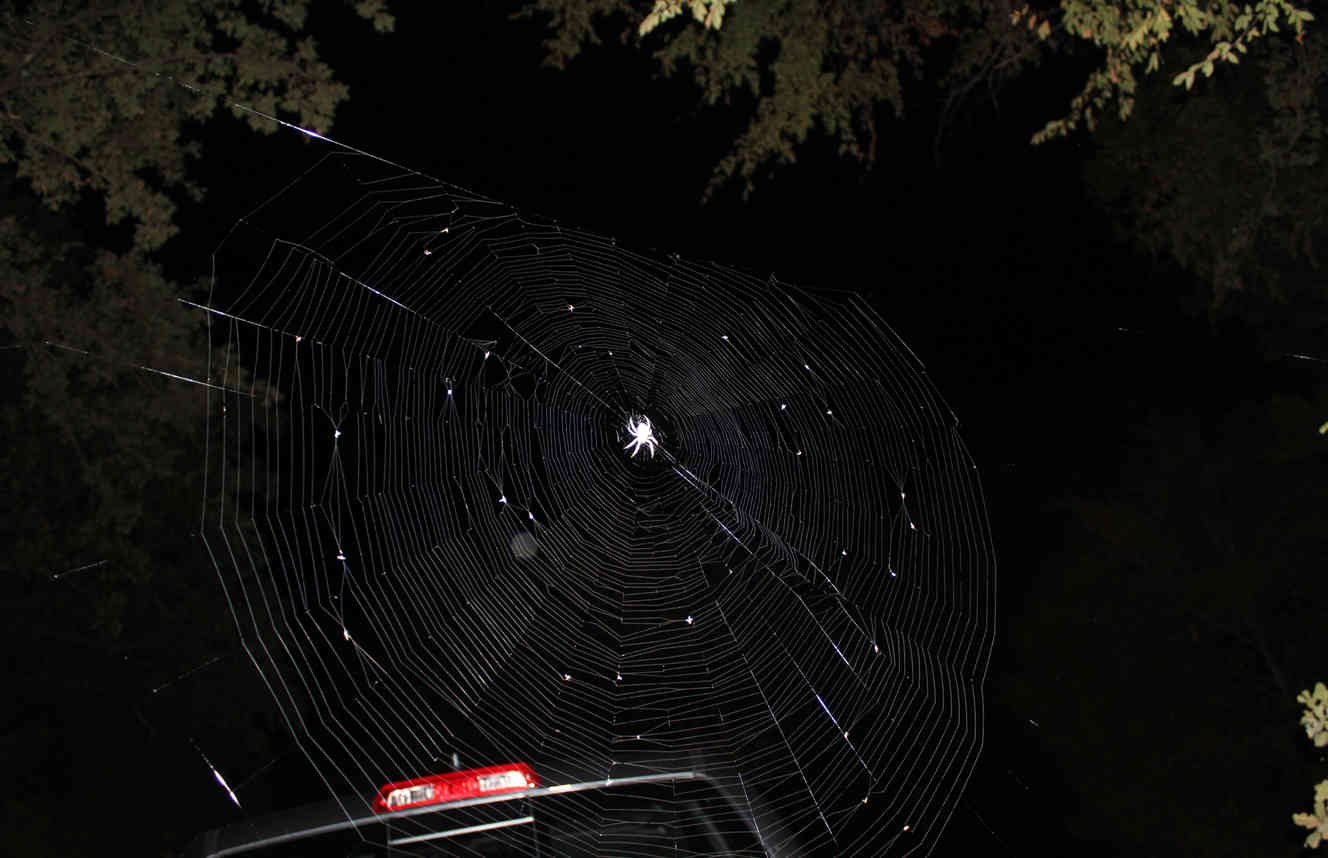 On Sunday morning, I woke up at 5:40 from an unsettling dream about a non-existent problem back at the office, and suddenly realized I was on vacation and within a short distance of my fishing hole. It was time to rise-and-shine. I made coffee and had a little snack before driving, in the early-morning darkness, to the parking area near the boat-launch. When I arrived, it was still too dark to see, but with the help of an LED light clipped to the bill of my cap, I managed to attach my lure and navigate down the small pier without falling into the lake. There was quite a bit of activity in the calm glassy water. Along the shoreline, small fish were feeding on schools of minnows, that were feeding on plants and algae and small insects, while larger fish lurked about waiting for that perfect meal - attached to the end of my line, I hoped.

It was warm, for an October morning, but it felt good and I was happy to be fishing at Fairfield Lake. We had been wanting to visit Fairfield Lake State Park since we camped at nearby Fort Parker State Park a few years back. Dawn was close. The sun was shining on a thin layer of stratus clouds and reflected a pinkish glow down to the world around me. A pair of cormorants flew overhead - I watched them fly across the lake until they faded out of sight. A large fish hit the water within casting distance of my seven-foot rod. I cast towards it several times, but no luck.

After a while, I changed my bait from a pumpkin seed rubber worm to a top-water rig and cast out several more times, but never got a single hit. I switched from the top-water rig to a spinner-bait, a lure I had good luck with on previous fishing trips, and continued to cast into the still water near the reeds and cattails.

The sky was getting bright and the activity in the water seemed to slow a bit, so I decided to call it quits for the day and head back to camp for bacon and eggs. After a delicious breakfast under clear skies and shade-trees, we geared up for a late morning hike.

While walking to the Nature Trail's entrance, we passed a travel trailer that was the same model as the 30-footer we recently purchased.  The owner was packing up their equipment and preparing to leave.
"You have the same exact trailer as us," I hollered.
"Yes, I saw you drive by yesterday," he said.
RVers don't usually pass up a conversation about their rigs. He stopped what he was doing and walked towards us.
"How do you like it?" I asked.
"We love it. We bought it used from a family that was living in it while they were building a house."
"It looks brand new," I said.
"Yeah, they took good care of it."
"Say, have you had any problems with your furnace? Our trailer gets very hot under the sink and I wondered if yours was doing the same."
"To tell you the truth, I have never used our furnace. We bought a small portable ceramic heater that heats the whole trailer. Besides, if you use your furnace, you are burning up your own propane. If you use a ceramic heater, you are using the park's electricity."
"That's a great Idea! Why didn't I think of that? I never thought using a portable heater.  I suppose I didn't think it would do the job of heating up the whole trailer.  Thanks for the tip!"
"No problem at all," he said.
"I am Matt, by the way."
"I am Alex. It is good to meet you."
"Where are you guys headed next?" I asked. "Are you going back home?"
"No, we're going to Lake Livingston State Park for a few days, then we're heading back to our home in Fort Worth."
"Lake Livingston is a beautiful park," I said. "We went there a few years ago."
"Are you guys retired?" he asked.
"No, we still have a couple of years of work left," I said. "You?"
"We're in the same boat as you - still have a few years left."
"Yeah, I hope I can hold out."
"Me too," he replied. "Say, do you have a name for your trailer yet?"
"No. We sort-of named our old trailer - we called it The Lake House."
"My wife calls our trailer Ima-Jean," he said with a laugh.
"That's perfect!" I said. "Imagine... Ima-gine... Maybe we'll do the same," I added, with a big grin on my face.
"Sure," he said.
"Well, I don't want to hold you up. Safe travels!"
"You too," he replied.
It pays to talk to fellow RVers. There is beneficial trailer-park wisdom to be shared by all. We talked to this fellow for only five minutes, and walked away with a solution for our heating problem, and a new name for our trailer! How about that?

The 2-mile Nature Trail was connected to a shorter .5-mile Scenic Loop Trail. It was the perfect hike - one we could finish before the mid-day heat.

The trail's entrance was an easy walk from our campsite and meandered near the edges of a peninsula that was not far from my early-morning fishing hole. The Nature Trail and Scenic Loop Trail combination seemed like more than 2 1/2 miles - probably because we stopped frequently to watch for birds, examine the plant life, and take in the scenic coves and natural wildlife habitat. The trails were lined with a variety of oaks, hickory, dogwood, elm, and cedars. The thick canopy of trees made the hike bearable, as the sun continued to rise and quickly heat up the day, but we managed to finish our hike and get back to our campsite before it got too hot.

In mid-afternoon, even though the heat was approaching intolerable, we decided to hike the .7 mile birding trail. The trail appeared as though it had not been used in several months. Spider webs were stretched between the overgrown shrubs and tall weeds concealed the trail's path. We abandoned the hike about halfway through and headed back to camp to relax under the trees by the lake and enjoy some cold beverages.

After dinner, we strolled around the campgrounds to look at all of the different types and styles of RVs. We saw everything from small SUVs towing light-weight pop-ups and single-axle trailers, to the heavy duty dual-wheeled pickups pulling large fifth-wheel rigs. No matter what your camping needs are, there's an RV solution out there for you.

Back at camp, we began stowing our propane stove, lantern, camp chairs, and other equipment that was scattered around outside our trailer - there was supposed to be rain over-night, as the approaching front passed through. 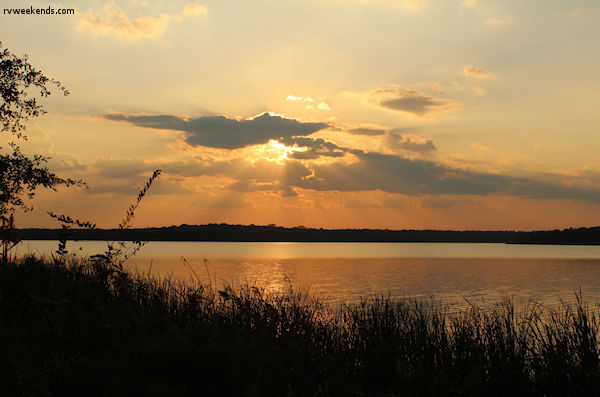 Around 3:00am, the first cold front of the season blew in. You could almost count the individual raindrops, as the front passed. It was as though someone gave the wet tree hanging over our RV one good shake, and then it was over. We were hoping for more rain, since we haven't had significant precipitation since June, but we were grateful, nevertheless, for the seasonal change.

On our last day at Fairfield Lake State Park, we woke up at 6:00am to a breezy overcast morning with temps in the upper 60s. You could smell Fall in the air. We took our time packing up and left Fairfield State Park around 11am and headed for Purtis Creek State Park, just a little more than an hour away.