Brazos Bend is a beautiful Texas state park located along the lower Brazos river just southwest of Houston.  If you are planning to stay overnight, it has plenty of RV and tent camping sites to choose from. There are about 40 miles of hiking/biking trails, excellent birding, superb fishing (although I didn't get a chance to wet my own line), several large day-use areas, and even an observatory for studying the night sky.

One of the biggest attractions of Brazos Bend State Park are the numerous American Alligators that have made their home in the park's many small lakes.


The weather in February can make camping unbearable (even if you have an RV), but in 2016, the strong El Nino kept the colder weather to the north and provided a beautiful 4-day weekend for our late-winter southeast Texas RV camping adventure.

We arrived at Brazos Bend state park on Thursday afternoon, secured our travel trailer in campsite #220 and began planning activities for our three night stay. The temperature was 68 degrees with a light north breeze. It felt a little cool, but nothing a long-sleeved T-Shirt couldn't fix.


Friday morning, after a sunny outdoor breakfast, we drove to the park headquarters to talk to the rangers about which trails would be best to hike, given that we only had two full days to explore the park's many attractions. The rangers suggested the 40 Acre Lake and Elm Lake trails. The total mileage was about 4 1/2 miles, counting the Spillway Trail (twice).


We parked at 40 Acre Lake, less than a half mile from the parks headquarters, and began hiking the 40 Acre Lake Loop Trail (1.2 mi) towards the Hoot's Hollow Trail (.46 mi).


The short hike on the picturesque Hoot's Hollow Trail was well worth the extra half mile. The slow shady trail seemed to tunnel through the surrounding thick woods - woods that provide a perfect recharging spot for migrating birds and a permanent home for local wildlife.

After Hoot's, we continued hiking on the north side of 40 Acre Lake Trail to the top of the Observation Tower to take in the magnificent view.

Birding was superb along all of the trails, especially the .6 mi. Spillway Trail that connects the Elm Lake Trail to the 40 Acre Lake Trail.

The assortment of pictures below shows just a few of the many birds and critters we observed while hiking along the Spillway Trail and around Elm Lake (center). 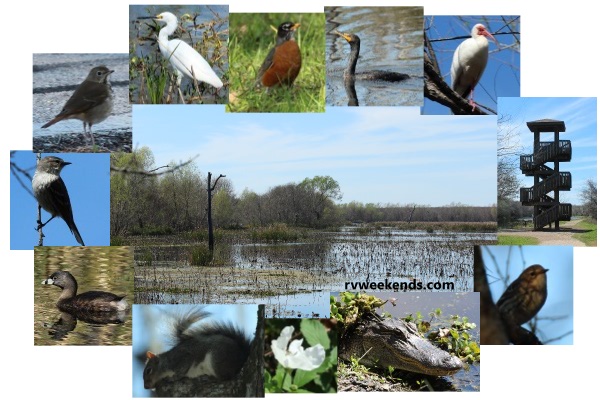 Around noon, we found a shady park bench near the shores of Elm Lake and ate lunch. While we were resting, we made a list of the birds we had seen since we began our hike:

The American alligators were not scarce in Brazos Bend State Park. We saw countless gators  swimming in the small lakes and lying in the sun along the shores. The American alligator can grow up to 14 feet long and are known to move quick in short distances. They feed on just about anything they can catch, fish, snakes, lizards, turtles, water birds and small mammals.


After a day of hiking, we returned to our campsite in the Red Buckeye Camping area and relaxed underneath the trees.

On Saturday, we woke early and hiked the 1.4 mile Red Buckeye Trail and the 1.74 mile White Oak Trail. Both trails have sections that run along the banks of the Brazos river. At the time of our visit, the river was at normal levels, but it was evident that the water had recently been much higher.

After hiking the White Oak and Red Buckeye trails, we concluded our day of hiking with the 1.9 mile Hale Lake Loop trail, and a visit to the Hale Lake fishing pier (above - lower right).

Saturday, after sundown, we paid a visit to the George Observatory to get a chance to view the night sky through at least one of their three telescopes (14", 18" and 36"). At the time of our visit, the planet Jupiter was clearly visible. We were able to see Jupiter's cloud bands and several of Jupiter's moons. Later in the evening, we saw the Orion Nebula on one of several smaller privately owned telescopes that were provided by local astronomers.


Brazos Bend State Park was an exceptional park to visit, especially if you like nature, hiking, biking, birding, fishing, camping, astronomy and gators! We are already planning our next trip!